Before I got involved with painting my living room and dining room late last fall, my main project was my braided rug. I have always liked braided rugs, but never thought the shape of my living room was right for one. It is very long and narrow, about 11' by 18. With various entry ways placed in inconvenient places, it is not an easy space to position a rug.

After looking endlessly online and through catalogs, I decided that if I wanted one to fit the room, I would have to make one! Also, I really disliked the fact that it was practically impossible to find a rug made of natural fibers at a reasonable price. I had been collecting wool for years, and some time ago I had even made an effort to make a rectangular braided rug, by just lacing the strips randomly together. I was never quite sure why, but it just never looked right. I decided it lacked definition. It needed a predominant color to pull it together, but also, I decided that there was something inherent about the oval shape that made it very agreeable.
The beginnings of a new rug soon started taking shape on my dining room table!
It didn't take me long before I realized that this is going to be a very, very long project! One of the hardest things was to figure out how much I needed for each row. It is no big deal in the beginning because the rows are all short, but I can see that towards the end of the rugs the last few rows are going to be a challenge to get enough in each color.
It is also very physical. I found that it hurt my wrist quite a bit in the beginning. I had to keep stopping. Also, it seem the only way I can do a good job on the braiding is to do it standing up, so it does get tiring.
Unfortunately I didn't take any pictures of the very beginnings of the rug, but here are a few that I took in October. The colors are a bit washed out in them. It is a little bit brighter than these pictures would have you believe. Furrytail (my Maine Coon), and Ollie (Orange tabby) take turns supervising the work! It is really getting too big to work on the 2 tables I have put together. 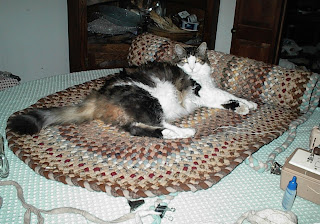 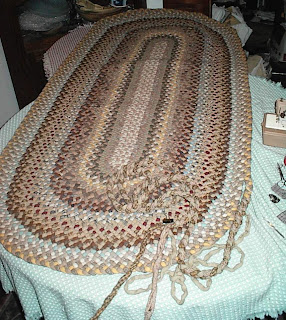 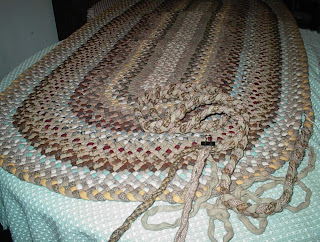 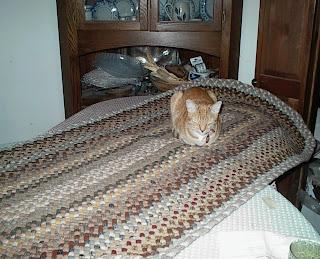 When these pictures were taken, it measured about 88 inches long, by 42 inches wide. Something went wrong in the beginning. There is supposed to be a difference of 48 inches from the length and the width., and actually I would have preferred about 50". I have not gotten it up to 46".
The colors are totally different from the picture in my head. I am sort of making it up as I go along. I will have to start planning a bit more closely as I get nearer to the end though. It is becoming difficult just getting enough wool for one round. Quite the challenge!
I don't know what I was thinking when I thought I might finish it by the holidays! HA HA! Maybe the holidays NEXT year!!!
Well after I took the pictures, I had had a major setback for my rug. I was using a thinner piece of wool because I needed the color. I had my doubts about it, but kept going anyway. It was so thin that it was folding over in the braid. I was able to control it somewhat on the side I was working on, but when I looked on the other side I knew I had to take it out. The other side was wrinkled, folded in almost every fold. Since the rug is supposed to be reversible, I didn't think it would look very nice! I wound up undoing 3 rows! 3 BIG rows! Could have done without that! I decided to stop working on it while I concentrated on the painting.
This is going to be quite a challenge to grow it to be 13' x 8'!
Posted by Erica at 6:45 PM