A couple of finishes to show

May has been a very difficult month!

Just two days after losing Max, we had to bring Furrytail (our Maine coon) down to NJ to have surgery for a gigantic (non cancerous) cyst (or collection of cysts) that had attached to his liver.

Fortunately everything went well, and he is back home with us! In fact, I have never seen a cat recover from surgery so quickly! He had a huge incision, from top to bottom! You would never know it to look at him now though!

Of course all of this was quite unexpected and quite expensive!

Now, it seems to be my turn to have health issues, mostly with my back. I am hoping to be able to avoid having surgery.

Good thing I had my stitching!

Margaret Ledden has actually been finished for a while now. I just haven't had a chance to post the photo. 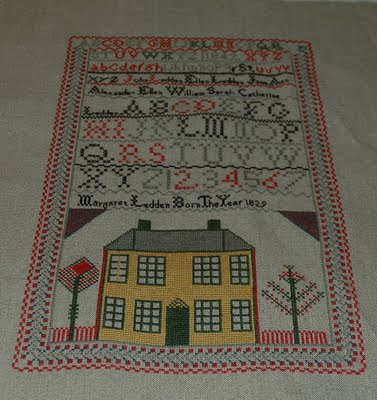 I love the trees! They seem strangely art deco-ish to me.

Then, I turned my attention to an older kit that I had in my stash. This was a kit for a pin cushion doll. The kit included a half-doll, but when I looked at it, I was disappointed that it was rather modern-looking. I was really going for an antique look. So, off to ebay I went. I found the perfect little half doll. I love the coloring in the cheeks. The only problem was that it was considerably smaller than the one included in the kit. I scaled it down by stitching it on 32ct instead of the 25ct that was included, but it still came out a bit big. 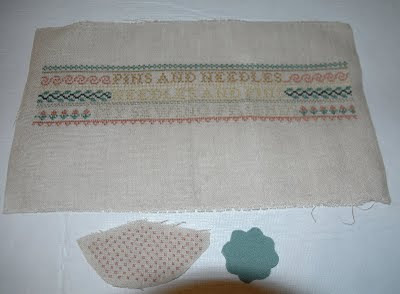 Pins and Needles
Needles and Pins
My Sewing Friends

It was an easy stitch, but gathering the fabric was quite a chore!

I also decided to make a little strawberry emery that was not included in the pattern. Luckily it turned out ok. I was fortunate to find a bit of wool left over from my rug that exactly matched the green floss. 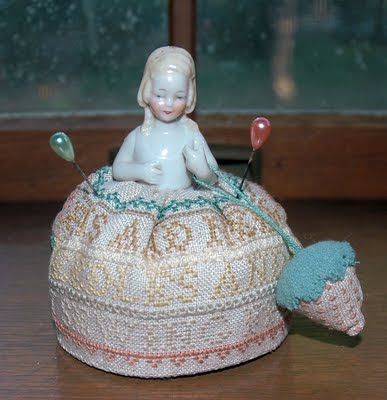 I decided to give it to my mother-in-law for Mother's day.

I'm so sorry about your poor cat's surgery -- glad to hear he's recovered, and so quickly too. I love your Margaret Ledden finish -- it's beautiful! I see what you mean about the art deco trees. I love your doll pincushion finish too -- perfect doll for it. Gorgeous! I hope your back problems get better so you don't need surgery. Take it easy!

I'm sorry about Furrytail's unexpected trip to the vet and surgery but glad he's doing so well. And I'm so sorry about Max.

Your doll turned out wonderfully!

I love the little pin cushion doll. As a fan of samplers, I enjoy stitching reproduction samplers, too. The colors on yours are delightful.

Isn't a pity we can't claim our pets as dependents. Vet bills can be astronomical though well worth iy if the treatment improves the quality of life of our companions.

Margaret Ledden is so pretty, as is your pincushion doll.

Sorry to hear about your kitties but good to hear that Furrytail is recovering.

Hope your back feels better soon!

Sorry to hear about poor Furrytail, I hope he's feeling a lot better now, and I also hope your back problems don't end up in surgery for you. Love your Margaret Ledden finish.

Congrats on your finishes! Who was the designer of Margaret Ledden? She is lovely!

I just love the pincushion you stitched! I am going to have to do a little internet searching for that one! The doll is simply beautiful!

I hope your kitty is recuperating and back to his old self...